I arrived in Idaho to work on pre-production for a project planned the following year.  (The South America trip).

The team told me that BASE jump training was going ahead with Red Bull athlete Miles Daisher.

“Miles is an accomplished canopy pilot with more than 7,200 skydives and 4,500 BASE jumps, which is more known BASE jumps than anyone on the planet. He is a member of the Red Bull Air Force, a specialized human flight team of expert pilots.”

It was always my understanding that to BASE jump it was necessary to have a lot of skydives under your belt first.  I have only ever done one tandem skydive and that was years ago.

Heading to Twin Falls, I was expecting that the day would be spent talking about BASE jumping, that we’d be doing some theory, looking at kit and seeing the jump site.

However, on route, I was told that people actually do learn to BASE jump with no other flying experience!  Of course, it’s far better (and safer) to have the experience of skydiving.  Miles reassured me slightly, saying, as I was a paraglider pilot it was great start because I understood canopy control.

Quickly it had dawned on me that the plan was to spend the morning as I had thought, talking about BASE jumping, doing some theory, looking at kit and seeing the jump site.  However, the plan for the afternoon was to actually go BASE jumping!

Miles is a fireball of energy; his knowledge, expertise and full on approach was brilliant.  I was still terrified!

Time was spent packing the kit and Miles explained the process of learning to BASE jump.  To begin, I would do a static line jump.  That meant Miles would hold the pilot chute.  (The small parachute that drags causing the main chute to open). So, initially the only concern I had was jumping.  After two seconds of free fall the parachute would open leaving me to just fly down and land.  Simple!

As we headed out to Perrine Bridge I was getting nervous.  Luckily there wasn’t a lot of time to focus on my nerves.  Miles worked with us on muscle memory training and talked us through the whole process.  We scouted the landing zone and worked out a Plan A, B, C and Z.

Walking out along the bridge was like an out of body experience.  I was scared but it was essential to hold myself together and focus on what I was about to do.  It was like the time I fell off Mont Blanc – I was falling but I needed to be calm and think logically.  Which is exactly what I did.

I was going first.  Climbing over the railing of the bridge onto the tiny ledge was probably the worst part.  I held on tight and wedged my heels in.  Once in position, face forward, leaning out, I looked straight ahead.  The point Miles gave us to look at was a mound of earth that was Evel Knievel’s jump ramp.  In 1974 he’d famously attempted to jump the Snake River Canyon on a rocket cycle.

Miles said I was good to go.  We went through my final checks.

“SEE YA” and with that I flung myself forward off the bridge!

Here’s a link to a clip of one of the first static line jumps that I did.

Here’s a link to a jump Miles did right after mine.

As experiences go, it was up there with the biggest sensory overload I think I’ve ever had.  The focus, concentration, fear, thrill, physical sensations and relief when I touched down safely are a lot to have going on all in the space of seconds.

Meeting Miles was brilliant, he’s a unique person and having him as my coach was a privilege.

As we drove away from the bridge that evening all I could think was, “Mum is going to be so cross with me”.

Over the following week I did 10 jumps.  Below is a clip of one of them. 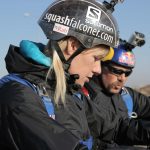 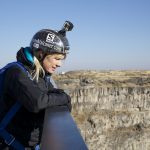 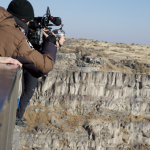 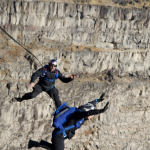 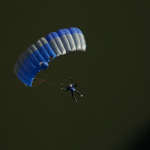 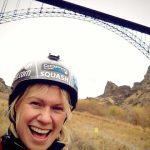