Cho Oyu, “The Turquoise Goddess” is the 6th highest mountain in world and only 600m lower than Everest.  After becoming the first British women to take our skis and snowboards on Mustagata Suzy (my mountaineering buddy) had a dream to become the first British woman to ski an 8000m peak and asked me to join her to climb Cho Oyu.

I jumped at the opportunity.  The timing was perfect because although I was working, my contract was coming to an end.  I didn’t have enough money to go so I sold my motorbike to pay for the trip, I was sad, but it was worth it.

I decided not to join Suzy for the ski descent, I had a different idea about coming down.  Just before we left for the expedition my good friend Fritz gave me a small plastic bum board and said, “come down the mountain on this!”.  It made me smile and I thought, “why not?” so the bum board was packed.

Cho Oyu sits on the Nepal China boarder and can be climbed from either side.  We had flown into Kathmandu and would take vehicles, over 10 days to travel into Tibet, to reach the Chinese Basecamp to begin our climb.  It was a 4hr drive East to the last town of Nepal, Kodari.  From there, there are two sets of customs and immigration to clear, Nepalese then Tibetan.  Each are separated by the Bota Kosi River and it is necessary hire local porters and vehicles to carry your bags across the Friendship Bridge.  Upon entering Tibet, the clocks immediately go forward by 2 ¼ hours.

We travelled by bus to Nylam, 3750m and spent two nights in order to acclimatise.  Continuing the bus ascent into the Tibetan plateau, to the town of Tingri at 4300m was magical.  The high Lalung La pass (5,082m) gave spectacular views of Shishapangma, Cho Oyu and Everest.  We were encompassed by iconic Himalayan giants, pristine glaciers and untouched peaks.  From Tingri we had a final short journey to Chinese Base Camp and from there we were on foot.

The camps on Cho Oyu;

Our walk to Advanced Base Camp gave us views of the Nangpa La Pass where the shocking and devastating shootings occurred in 2006.  The pass, a Tibetan refugee route into Nepal, was the route taken by the Dalai Lama during his flight from Tibet.

Due to the sensitive political situation getting visas had been tricky.  Even our Yaks (carrying most of the expedition equipment) and our gear porters had to have permits.  We were all closely monitored by Chinese officials and when the Yaks permits were found to be incorrect at the Chinese basecamp they held the Yaks most of our gear!  We continued to Advanced Base Camp with some chocolate, one down jacket between us and nothing for a night in camp.  Other teams on the mountain generously loaned us kit.  Luckily before the night was over, realising the Yaks were of no political threat, they were released and our gear reached us before daybreak.

This mountain taught me more lessons than any other peak I’d climbed before.  She was higher, the conditions were more sever and I went beyond the physical climb and into a mental zone that I hadn’t previously delved into.

We rested at Advanced Basecamp and headed up to Camp 1 to sleep for acclimatisation.  The camp was beautiful but also perched precariously on a snowy ridge.  No one slept much on the first night which isn’t uncommon as you move higher.  The wind thrashing the tents didn’t help much either.  By the following day we’d lost two tents and the weather wasn’t improving.  We decided to stay a second night which with hindsight wasn’t the best move.

In the early hours of the morning our tents were shredded from around us in 100mph gusting winds.  Using our ice axes, we pinned ourselves and gear to the ground and sheltered in a crevasse.  The camp and all 22 tents were destroyed.  We made a hasty retreat back to Advanced Base Camp at first light.  Some members decided their expedition was over at this point.  The distress of being lifted in the air by the strong winds and having the camp torn from around us was very frightening.

We had fun at Advanced basecamp while we waited for new supplies to be brought in.  We played games, danced to a solar powered disco and bonded well as a team.  The wait however, was jeopardising our summit bid, no one had got beyond Camp 1 and therefore no ropes were fixed higher on the mountain.

On arrival at Camp 2 we were struggling.  Weak and exhausted we forced ourselves to eat, drink and melt snow for water.  Keeping yourself and your team well on mountains is essential.  Staying calm, being with Suzy, chatting and laughing was how I got through.

We made it to Camp 3, albeit a week later than we had planned, our food supplies were very low.  I was a vegetarian but I learned on this mountain what real hunger was!  When the only food we had left was vacuum packed chicken, I tucked in like a hungry animal and was amazed how crazily I devoured it!

The summit push was absolutely mega, we had lost condition during our acclimatisation and were exhausted.  Leaving our tents at 3.30am in freezing conditions waiting for 60 people to climb the rock wall on the one fixed rope cost us two hours.

We finally ascended the steep ridge onto the summit plateau after lunch, it was a clear day and the views of Everest just 600m higher were magnificent.  The seemingly never-ending gradual incline to the true summit took forever, but we made it at 1.15pm.  I was out of oxygen and it took 40mins to change my tank and Suzy to put her skis on.

Suzy skied from the top becoming the first British Woman to ski from an 8000m peak and I descended a small section on my bum board, unofficially becoming the world’s highest ever bum boarder!

It didn’t take us long to reach the abseil.  Where we witnessed a Chinese woman simply throw her figure of eight away!  She was delirious with altitude sickness.  A three-hour wait and rescue ensued.

Cold and struggling to think straight, during my abseil, I caught my crampon in an old rope and ended up upside down.  I lost my oxygen mask and slipped in and out of consciousnes.  A knife wielding Sherpa reached me first and wanted to cut the rope.  Thank god Dan Mazur, Summit Climb leader, got to me, suggesting cutting the rope wouldn’t be the best plan and he got me down safely.

Half an hour from Camp 2 we came across a man, snow-blind, just sitting in the snow.  His team had gone on and he was “waiting to be rescued”.  He said he was calling them with his headtorch on flash mode.  Clearly sick with altitude and blind he would have perished if he spent the night in the snow.  With no other choice or nearby help we half carried, half dragged him down.  His team hadn’t even realised he wasn’t in Camp.

Reaching Advanced Base Camp we were a few kilos lighter, with a wealth of experience that would be invaluable for future mountains and life in general.

This is a BBC edited piece which includes the Cho Oyu climb in the first half.

And this was an edit Suzy and I made from our trip. 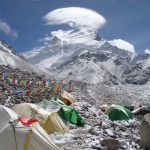 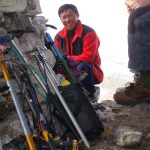 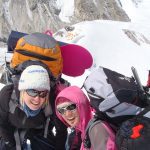 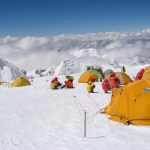 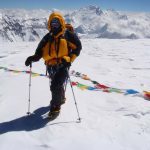