After climbing Loubuche East in April 2009 we were already most of the way to Everest Base Camp.  There was an option to continue the expedition for a few more days and take in the iconic trek.  In 2008 I had climbed Cho Oyu and three of the guys on the climb, David, Vik and Sam were now at Everest Base Camp.  They were attempting to climb the mighty mountain.  Seeing them was even more of an incentive to go.

The trek to Everest Base Camp is very special.  Knowing you are tracing the footsteps of so many amazing mountaineers and adventurers is pretty cool.  Add to that the rich culture of the Khumbu Valley, the wonderful Sherpas and quirky teahouses lining the route and you have the ingredients for an unforgettable trip.

The name Base Camp lulls you into a false sense of security, it doesn’t sound high.  But at 5,300, it’s almost 500m higher than Europe’s highest mountain, Mt Blanc!  It’s essential to take your time during the trek and not to underestimate the challenge you’re embarking on.

There’s a gradual incline as you approach Base Camp, which remains out of sight until the track levels off.  It isn’t until you head around the corner that the vast camp which sits in the floor of the valley unveils itself.  I couldn’t help but be wowed by the sprawling mass of rock and ice sitting at the foot of the Himalayan giants, speckled with the colourful tents of the expedition teams.  It was like I’d arrived at a city on the moon!

It can take a while to locate who you are looking for at Base Camp.  Each expedition team builds their village of tents amongst the ice and rock.  It’s not smooth and flat, which I’d expected.  Sitting at the foot of the mighty and iintimidating Khumbu Ice Fall the ground is uneven and unforgiving.  Crevasses and sheer drops with streams running through a make for a chaotic network of channels to navigate and the ground is constantly shifting and changing.

We found the Summit Climb team almost an hour walk away from the start of the camp.  Fortunately, the guys were home and doing what most people do at Base Camp; relaxing, eating and drinking!  It was so good to see David, Vik and Sam, they were looking well and were on great form.

We stayed the night in the Camp and early the next morning headed over to have a better look at the Khumbu Ice Fall.  It’s so huge.  The ice towers are as big as multi story buildings, precariously positioned and looking like they might topple at any moment.  Without a permit you’re not allowed to venture into the icefall, so that was as far as we could go.

It was an amazing experience to visit Base Camp.  While I was there I didn’t think for one second one day I’d be back to climb Everest.  That just wasn’t an option for me… but then one day, that all changed! 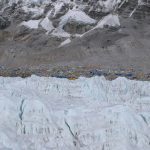 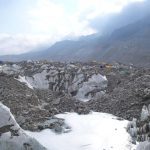 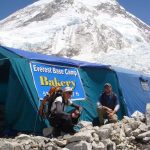 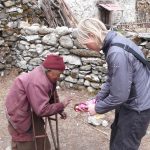