Gran Paradiso is the 7th highest mountain in the Graian Alps at 4,061m.  The original plan was to join my good friend Irwyn Jehu, who I climbed and flew from the summit of Mont Blanc with in 2009.  We wanted to climb Monte Rosa and paraglide down.  However, snow put an end to those plans.  A metre fell in the days before our intended climb.  Although the weather cleared it was unlikely that we would make the top.  Or take off with much snow to wade through.  Mountains can be like that.  They don’t always fit in with your plans!

So the morning we were due to begin our climb of Monte Rosa we changed our plans.  Irwyn has huge experience in the mountains, flying paragliders and understands weather.  He had been looking at the whole area and suggested instead that we head down the Aosta Valley to climb Gran Paradiso.

Gran Paradiso is a great mountain, it’s often used as an acclimatisation peak for people who want to climb Mont Blanc.  It’s far less busy and it has one of the most beautiful summits ridges I’ve ever had the pleasure of being on.

Friend and mountain guide Marco Tamponi led the climb.  Irwyn and I could have done this trip just the two of us, but to have a mountain guide takes so much pressure off.  There are a lot of decisions constantly being made climbing a mountain, let alone attempting to fly off it too.  Having an experienced guide and a team to discuss and work with is something I really like.  Plus Marco is a lovely guy.

We planned three days to climb Gran Paradiso, which was plenty of time.  It meant two nights in the Chabod Refuge.  We left mid morning to hike up and would use the following day as a rest day.  I enjoyed having two nights in the refuge.  They’re such spectacular places to be and it’s so nice to take time and enjoy them.

It was an early start the next day for the summit.  The weather was great and it was a beautiful climb.  The summit ridge blew me away.  It’s quite long and narrow.  Sharp rocks stabbing out of the snow create great hand and foot holds, giving the ridge real depth and character.

It was lovely being on the summit although I was filled with excitement and nerves because we had weather that was flyable.  We set up our paragliders to take off just below the top and I went first.  The pitch wasn’t steep enough and I couldn’t take off.  Our next option was a much steeper pitch slightly below us.  It was a very committed take off.  Sometimes they’re the best.  When I can’t make a mistake, I’ve noticed I just don’t.  So far anyway.

It is the most extraordinary feeling climbing a mountain and then taking off and flying into the air away from the summit.  Days spent climbing and just minutes to get down.  I LOVE it!  The flight was awesome and it was so special to share the journey with Irwyn.

Just like in 2009, when we’d flown from Mont Blanc, Irwyn said, “I think you’re the First British Woman to fly from the top on a paraglider!”.  And it turned out I was!

Here’s a short film about our trip. 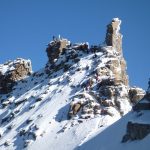 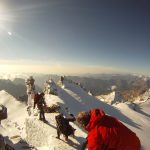 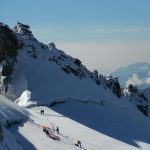 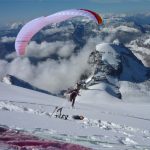