In 2014 the Nepalese government released a list of over 100 unclimbed peaks they would give permits for.  Khang Karpo was on the list.
In 2015 I was chatting with one of best friends, Kath, we met when we were 10!  We had done a lot together; school, ski seasons, learning to paraglide and climbing mountains.  After a 10-year break from mountaineering to have a family (Kath’s got three little ones!) we were talking about doing another trip together.  Alison, who Kath and I had met on Mustagata (a peak we all climbed in 2007) was keen too.  Our idea was to head to an unclimbed peak in Nepal and that’s when we found Khang Karpo.
Well, more accurately we found Mingma Sherpa, a very accomplished Nepalese guy with his own expedition company.   and Mingma had the team and the logistics to support our expedition.

Alison is a remarkable woman; she’s climbed the 7 summits, been to both poles, had a New York Times best-selling book and is a world-renowned speaker.  Don’t take my word for it though, check her out for yourself.  Kath, not only a super mum but a super model too, does extreme sports and runs her own business.  The team was certainly strong.  And the best part; we were three friends, who’s humour is perfectly matched and we were heading off on adventure together.  An unclimbed peak was a great goal but our motivation was all about the journey we were about to embark on and the memories we would make a long the way.

Unlike other expeditions this would be a small team, climbing more as equals and really having the opportunity to get to know each other.  Mingma wouldn’t be joining us for the whole expedition – he would travel into the valley to visit his mum – but would then be leaving us in the capable hands of his ‘cousin brothers’, Nima, Phurba and Tsering, three highly experienced Sherpas, for the ascent itself.

After just one day in Kathmandu our small team left early for the 9-hour drive to Gongur.  From Gongur we had a steady 7-day trek through the beautiful and quiet Rolwaling valley to Base Camp.  We had 15 days for the climb and the weather was looking good.  We stayed in a teahouse in Gongur and, tired from the days travelling, were looking forward to some sleep.  However, our arrival in Nepal coincided with Diwali and, with celebrations and pop-up karaokes in every village, no one was going to sleep early!  Over the next four days we trekked through Simigaon, Dong-Kang, Beding and finally to Na, at 4,180m the last and highest village in the valley.
As we made our way through the villages in the Rolwaling valley we met many of Nima, Phurba and Tsering’s friends and family.  They grew up in this valley and it was very special having tea with their parents, brothers, sisters and cousins.  We visited the homes they grew up in and saw photos from when they were younger.

Kath and I had decided to bring our paragliders with us – we thought that if we were lucky we might have an opportunity to fly, and it turned out that our rest day in Na was it.  There wasn’t too much chat as we hiked up to 4,500m, partly due to the altitude and partly because I was nervous.  I’ve flown from the summit of Mt Blanc, but that was seven years previously.  Flying at altitude is a different game altogether; the air is so much thinner.  Ideally you need more wind to take off and then once in the air, although glide angles remain the same, you fly faster and everything happens much more quickly.  The wind was changing but it wasn’t too strong so we set up on the hillside overlooking Na where there were plenty of options for landing.  The flight was short, and as I set up for my landing I was feeling happy that everything was going well… until I decided that perhaps I was a little high and I should put in an extra turn before landing.  This resulted in me being too close to a stone wall, which I then focused on and flew straight into!  I was lucky I didn’t break my legs.  The locals had come out to see us and they seemed concerned about my crash landing until they saw Kath, who was laughing so hard she couldn’t speak.  We were told that we were the first people to paraglide in Na and I was the first to land on a stone wall!

From Na it was a two-day trek to Base Camp, sited at 5,118m.  Phurba’s wife and mother joined us on the trek.  His mother
was so strong; she marched on ahead shouting at and steering a yak that she’d loaded with supplies.  Nima talked to us
about his life growing up in the valley and pointed out a small, old stone building where he’d spent time with his grandfather as a boy looking after the animals.
Just before Base Camp the terrain changed dramatically – we were now on the glacier, and it was all rock and ice.  There was no easy way through.  I stepped onto a big rock, it dropped down smashing my shin into a sharp point.  The pain was immediate and intense but as I walked it subsided.  When we stopped for a break I lifted my trouser leg and saw the blood.  I’d split my shin open.  Nima helped me patch it together with butterfly stitches and I hoped it would be okay as we moved higher.  When I climbed Everest I cut the palm of my hand on my crampons at Base Camp – it didn’t heal until five weeks later when I finally came down to a lower altitude.

We’d been on the move for just over a week and as we approached Base Camp we had our first glimpse of Khang Karpo.  Kath was of course missing her children, and seeing the mountain brought home the realities of what we were attempting.  Despite all our laughing, joking and relaxed approach to the trip, we were all fully aware of the dangers involved in what we were doing.  We knew each other so well though, we knew we’d take no unnecessary risks and the success of the expedition did not lie with reaching the summit.  For me this was one of the many wonderful things about doing this expedition with my friends – that a summit would be nice but not essential.  The expedition was already a success: time together exploring this remote valley, getting to know Nima, Phurba and Tsering and having a glimpse into their lives and, of course, flying into a stone wall – I’d never done that before!
Base Camp was amazing, nestled almost at the end of the valley.  There was no one else, just us.  Mountains towered over from all sides.  As the sun went down, the temperature plummeted, but with the night came the stars and here, high in the mountains, they shine brighter and are more spectacular than anywhere else I have ever been.  We rested for a day at Base Camp, but not Nima, Phurba and Tsering; they went to check out a possible route.  We had planned to attempt the mountain from the South Ridge, but they returned with bad news; it wouldn’t be possible as the hanging glacier was too dangerous to navigate.  We would make our attempt from the north side instead. Nima smiled and was confident that
we would have no problem reaching the summit.  Phurba wasn’t so sure and said, “We cannot see a way at the moment, we will find out when we get closer”.

With the weather forecast on our side, we left Base Camp early the next day and made our way across the crevassed glacier to our high camp, which sat at the foot of Khang Karpo.  It was here, at 5,700m, that I got my first headache. Kath had been suffering a little bit and Alison was showing signs of a pretty bad cold.  These are the times when keeping warm, fuelled and hydrated matter the most. We kept a check on each other and ourselves and, as only true friends can, offered no sympathy and told each other to “shut up and get on with it!”

At 2am the wind was howling and Nima shouted to our tent: “We’ll wait one more hour, if the wind calms down, we’ll go.” We left our camp at 3.36am.  Somehow climbing in the dark feels different to the light; it’s feels surreal.  Time passes fast and the distance covered is hard to judge.  The guys put a fixed line in the couloir to the col that would get us onto the ridge.  Alison isn’t as tall as Kath and I, but what she lacks in leg length she makes up in strength and speed.  So pace wise we were all pretty evenly matched.  The wind picked up as we got onto the ridge and, still dark, I stopped to add a few more layers.  The ridge was steep; we navigated five hanging glaciers, crossed four snow bridges and avoided multiple crevasses.  As the afternoon approached I became increasingly aware of our turnaround time. For the first time on the trip I did think perhaps we wouldn’t make the summit. Without too many words, slowly, we moved together as a team and made our way upward. A surge of emotion ran through my body as we made the final few steps to the summit. We had done it!  The day was clear, with views of multiple 8,000m peaks including my old friends Everest and Cho Oyu.
Sharing this trip and this moment with Kath and Alison and our new friends Nima, Phurba and Tsering – who we couldn’t have done the climb without – was very special. Mountains are magical places and standing on the top of them is never a given, but an absolute privilege.

We descended from the mountain, the final few hours in the dark.  My thoughts were running away with me, worrying if we could all get down safely.  Keeping my mental and emotional state in check on a mountain is just as important as my physical state.  I knew I was tired so I reminded myself we were all still moving as a team, we all had each other’s backs and actually we were all still doing well.  Reaching our high camp and collapsing into our tents was heaven.
Days later, back in Kathmandu, we received recognition of our first official ascent of Khang Karpo from the Nepalese government.  I thought to myself, Kath’s got three young children waiting for her at home.  Wont it be amazing to tell them mummies got a certificate for climbing a very big mountain. 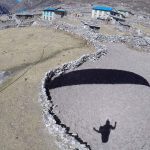 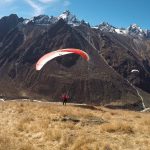 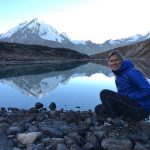 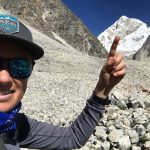 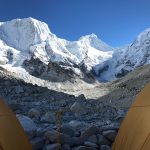 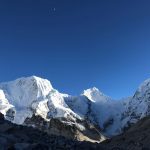 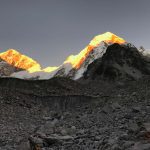 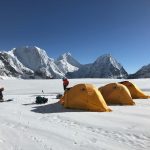 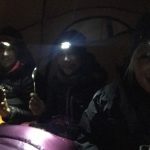 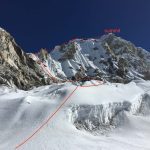 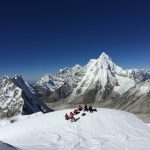 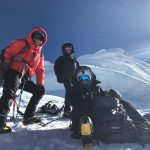 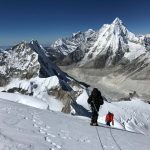 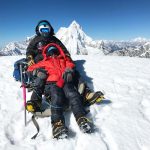 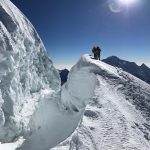 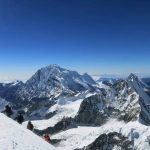 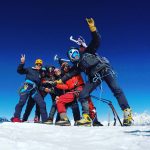