At the end of March 2011 I went to Nepal.  The plan – to climb Mount Everest.  At 8,848m it is the highest mountain in the world.  Not only was I planning to summit the mountain but I was also aiming to become the first woman in the world to solo pilot a paraglider from the top.

Sadly the conditions were too bad to even attempt to fly.  There were 60km/hr winds, it was -50’c and the visibility was poor.  The following morning the conditions had improved but it was still windy.  I attempted to fly from the South col, which is just under 8,000m, but I couldn’t launch the glider.

Why did I attempt to climb Mt Everest with the aim of becoming the first woman in the world to fly from the summit?  There are a couple of answers, a long one and a short one…  The short one, is simply, well why not?  And the long one…

If something isn’t an option I don’t consider doing it.  However if something starts to become an option I might start to wonder about the possibilities.  And that is basically how this whole big idea came about.

Everest was not an option.  Then one day I climbed my first mountain.  I was 24.  When I was 23 I hadn’t even considered climbing a big mountain let alone Aconcagua, a 7000m peak in Argentina.  It came about because my friends were off to climb it and I wanted to go too.  I had little mountaineering experience but I had a good level of fitness, a positive attitude and very importantly a team of people around me who I trusted and who knew what they were doing.

I didn’t think too deeply about the trip afterwards, I had really enjoyed the experience and was keen to do more mountain climbing.  Over the next few years I climbed more mountains, some smaller and some bigger and I enjoyed coming down in a variety of ways!

After summiting Cho Oyu, the 6th highest mountain in the world at 8,201m, in 2008 one of my team mates said to me, “Squash I think you’re strong enough to climb Mt Everest”.

And all of a sudden Everest became an option

I kept the idea in my head for a while, I didn’t talk about it or share my thoughts.  I was actually busy planning another trip.  This next project was the combination of three separate dreams I’d had.  I wanted to climb Mt Blanc, I wanted to ride a motorbike to the south of France and I wanted to fly from the top of a high mountain on my paraglider.  I realised I could do all three in one adventure – I could ride a motorbike from my home in the middle of England to the foot of Mt Blanc, I could then climb Mt Blanc with my paraglider on my back and once at the top I could leap from the summit and fly back down!

This idea came to me in June 2009.  I called my friend Irwyn – he’s the guy who taught me to paraglide and I knew had always wanted to attempt a flight from the top of Mt Blanc.  He agreed we could do it together and with that (and a little creative work to get a BMW motorbike, a lightweight Ozone paraglider and a BBC video camera) I was on my way three months later.  In October 2009, having done the trip and successfully flown from the top I found out I was the first British woman to have flown from the summit of Mt Blanc!  More importantly, I’d discovered that flying from the top of mountains was possible and an excellent option.

Saying it out loud

The record meant that I got some media attention and I was invited to do an interview on BBC radio.  The presenter said to me towards the end of our chat, “So what’s next?” and I heard myself saying out loud for the first time, “Well, I’d really like to climb Mt Everest and fly from the top of that!”

I knew from that moment I had committed myself to this wonderful and wild plan.

It took a huge amount of planning, training and preparation – both mental and physical.  I am very grateful to my sponsors and all the people who supported me, believed in me and encouraged me.

Everest in an expensive mountain to climb and even with the sponsors and support I had I had to take out a loan to pay for the expedition – which took four years to pay back.

I’m not mad – honestly!  I made the decision to commit to this almighty challenge based on the fact that I had the relevant experience and skills.   With enough knowledge in both Paragliding and Mountaineering to give this trip a reasonable go without taking unreasonable risk.

I learnt to paraglide in the summer of 2006 and gained experience in all aspects of flying including flying from the summits of high mountains.  I was fortunate to fly with some amazing pilots.  If the weather isn’t right, I simply won’t take off.

I began climbing big mountains several years previously to this, in 2004.  In 2008 I summited Cho Oyu, which at 8,201m is the 6th highest mountain in the world; it is only 600m lower than Everest.  Mountaineering isn’t just about physical endurance it is just as much about mental and emotional strength.  I have never climbed as a solo climber. I’ve always climbed as part of a team.  Some days I’m strong and my team depends on me.  Other days I’m weak and I rely on the people around me.  I understand the importance of being honest about how I am feeling.  This can be the difference between making it or not.  For me climbing mountains is about the expedition in its entirety.  To summit a mountain is a bonus, to fly from the summit is a bigger bonus! 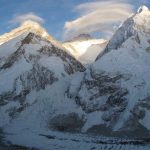 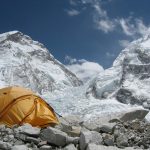 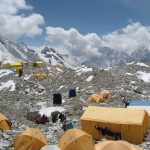 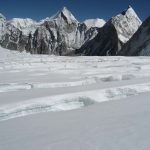 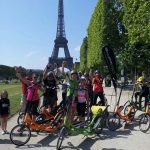 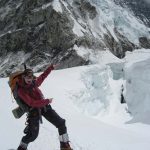 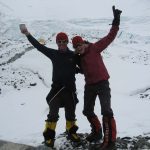 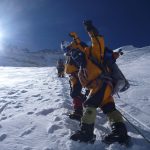 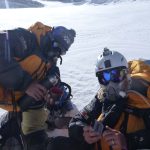 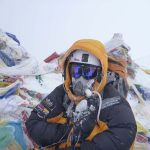 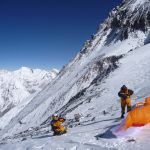 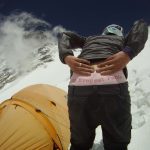