Mustagata, 7546m, in North West China, is a classic high ski peak.  It is a continuous, untechnical mountain with nothing over 30 degrees gradient.  Three years after climbing my first mountain, Aconcagua, my friends and I were hatching a plan to go back to the mountains again.  Suzy came up with the idea to be the first team of British women on Mustagata with our skis and snowboards.  We would climb up and ski down!  And we’d make a film about our adventure.

Suzy’s sister Carole, a BBC journalist, was on the team.  She imparted some invaluable advice for filming and our training began.  I spent the winter before our climb doing a ski season in France with Kath.  We trained together and very differently for this peak.  With a better understanding of what I needed to do I hiked up the mountains in Tignes with a heavy pack on my back.  I was acclimatising and strengthening my body in just the right way.

Mustagata is higher than Aconcagua and this trip would take a month.  Drawing from my experience on Aconcagua I made a few changes when I packed my gear for this trip.  Weight is a huge issue on mountains, so it’s essential to go light.  However, it’s also important for general well-being and mental health to look after yourself and be as comfortable as you can be.  I have a theory that if your knickers are right, then your day goes right.  So, on every trip I’ve been on I take the exact number of pairs of knickers as days.  Mustagata was a 28-day trip.  I took 28 pairs of knickers.

I am a firm believer that if you get the small stuff right – the details, then the bigger stuff falls into place more easily.

The first part of any mountain expedition is getting to the mountain itself.  Often help comes in the form of animals and on this particular mountain camels helped us carry our gear to basecamp.  It’s not every day you see camels carrying skis and snowboards!

We were a team of British women but there were also other people who had organised to do this climb with same company, Summit Climb.  Two people, Jonathan and Alison had come as individuals, we all bonded and became firm friends pretty quickly.  Expeditions accelerate the process of getting to know each other.  You tend to see who people really are in environments where they are taken to new limits.  It’s wonderful and one of my favourite things about a trip with other people.

On high mountains it is necessary to go through a process of acclimatisation.  This can be done in two ways. By resting at camps as you slowly move up the mountain.  Or, like we did, by climbing higher and coming back down again to sleep lower.  The latter method requires you to pass the same part of the mountain several times.  Psychologically this can feel tough, reaching a high point knowing you will have to go back down and back up again, multiple times, before even attempting the summit isn’t easy.

Rest days back at Basecamp became a luxury.  We had a lot of fun spending time playing bat and ball, getting to know each other well and, in Carole’s case, crocheting.  Mountain weather can change in an instant.  Some days we had snow and needed our down jackets and other days we lay on bare rock in our bikinis.

Jonathan, who was a sub 3-hour marathon runner, was finding things difficult.  He was struggling with low energy and didn’t feel good.  Being fit at sea level doesn’t always translate higher up.  He decided to sit out on our second acclimatisation trip to Camp 1.

The reality of mountains

“No helicopter rescue available”.  Mustagata is a remote, uncommercial mountain with no medical tent, doctor or rescue services, which some mountains do have.  To get down from base camp the option was a walk out or a 6-hour donkey ride.

Jonathan had severe altitude sickness and he made the sensible decision to head back down the mountain.  We had moved up to a higher camp and the following morning heard the devastating news that he had died in the night.  (We discovered later he died of a pulmonary embolism caused by a deep vein thrombosis).  I knew people died on mountains and it was a dangerous environment to be in, but to have it actually happen hammered home the very real risks a mountain presents.

Dealing with losing our friend was unbelievably awful.  It was an incredibly difficult time and made us question why we were even there and what to do next.

Losing someone does highlight that life is short and this isn’t a dress rehearsal.  We made the decision to continue our climb, with huge respect and awareness that getting back down safely was the goal.  The summit was not important.  In reality the success of any expedition lies in coming back down safely.

We reached high camp, 6,800m, in glorious weather.  A lot of the team didn’t continue due to altitude sickness and dehydration.  We worked tirelessly to melt snow and stay hydrated and fuelled.  It’s hard, often at altitude you lose your desire to eat and drink, which results in huge deterioration, fast.  The wind picked up during the night but at 5am we left the warmth of our tents for the summit bid.  It was freezing cold and we moved incredibly slowly.  One step, six breaths.  We saw the summit, but discovered it was a false summit at 7,400m.

The weather was deteriorating and we reached our turnaround time.  A non-negotiable time set to turn back from the summit if you have not reached it.  There was no choice but to turn back.  Happy to have made it as far as we did we took to our skis and snowboards to make the journey from 7,400m to 5,300m.  The awful hard crust with a bit of spring snow made for a slow and mostly unpleasant decent.   But that was ok!  It was amazing to have got so high, to be the first British women on the mountain with our skis and snowboards and honestly, not reaching the summit didn’t matter.  It was a huge experience and we will always be grateful for the bonds we made with Jonathan in the short time we knew him.

After this climb we organised a charity ball and raised £13,000 for several charities; The Jonathan Peacock Memorial Fund, Breast Cancer UK and The Earlybird Diabetes Trust. 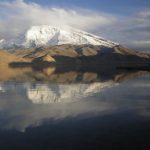 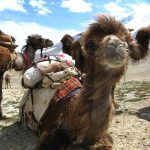 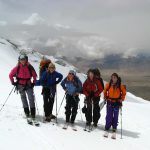