On 5th July 2013 I reached Paris on my ElliptiGo.  I had travelled through six countries in just over nine weeks covering 3074miles – a world record distance by elliptical bicycle!

The Go Trek started in the UK in Liverpool on the 30th April 2013 and was an idea dreamed up by Dave Cornthwaite.  Dave and I had talked about doing an adventure together.  So when he suggested we take on a 3000-mile journey on elliptical bicycles, I simply said ‘yes!’.

We realized that encouraging that same attitude in others could get them to try new activities, so getting people to ‘Say Yes More’ became a primary goal of ours on the trek.  We’re also very proud to have achieved our goal of raising £3000 for CoppaFeel!  A charitable organization that approaches breast cancer awareness with a unique and engaging spirit.

For the majority of the trek Dave and I were together until an unrelated injury on a rest day left Dave unable to continue after traveling nearly 2,000 miles.  I was determined to finish the trek, and pushed on for the final few weeks and miles, ending the adventure in Paris in July.

The trip lasted 67 days and took us across the UK, Holland, Germany, Austria, Switzerland, and France.  Highlights from the trip included: organizing a cycle event in the heart of Hyde Park with the London City Police, giving a lecture at the oldest running club in Holland, touring Holland with “the fitness Prince” Pieter-Christiaan of the Dutch Royal Family, running in the famous Ulm Minster stair race in Germany, and serving as the pace vehicle for Frederik Van Lierde during the marathon stage of his IRONMAN® France-Nice victory on June 23rd.

The Trek included 9 days of more than 100 miles of riding and only 9 rest days.  It was unlike when I climbed Mt. Everest or did an extensive cycling tour by regular bike.  This was the first expedition I’ve been on where I didn’t lose condition. In fact, I became stronger and fitter each week because the ElliptiGo gives an all-over body workout.

I finished the journey in Paris  under the Eiffel Tower, joined by an international group of ElliptiGo riders.

It was just an amazing trip.  There were so many unexpected things we encountered along the way.  We met some incredible people, and saw some wonderful places.

During the Trek while I was in the French Alps I took the ElliptiGo up the Col de L’Iseran – the highest paved mountain pass (2770m) in the Alps.  The video was shared on GoPro’s social media as Video of the Day! 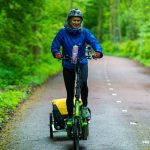 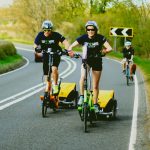 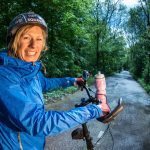 A portrait o Squash Falconer druing a short trip in the park located in the very heart of Rotterdam. 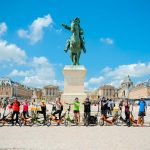 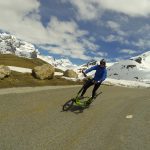 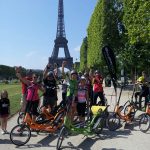