Aiguille de la Grande Sassiere, 3751m is in the Graian Alps.  The mountain sits on the boundary between the Aosta Valley (northern Italy) and the French Savoie.

Over fifteen years ago resting on the side of a ski piste in Tignes, France, we were looking across the valley to the largest peak on the horizon.  “That’s Sassiere, you can climb that” announced our friend Jason.   Climbing it sounded like a cool thing to do and I made a mental note that one day I might just try it.

I first came to Tignes in 2002 to join one of my best friends, Kath, to do a ski season, I was 20.   I worked in a bar in the evenings which meant that my days were free.  Kath and I snowboarded that season and we got out most days on the mountain.  We lived in the lower village of Tignes, Les Brevieres and on the run home we had amazing views across the valley and often admired Sassiere.

Neither of us were mountaineers at the time.  I began climbing big mountains in 2004 when I climbed Aconcagua.  Kath and I climbed our first big peak together Mustagata, in 2007.

Mustagata was 7546m so twice as high as Sassiere, but it wasn’t until 2014 (7 years later) that we got around to climbing it!

We did a recce for the climb in June, which proved invaluable.  It’s easy to go wrong at the start of this climb and we had done just that!  From the car park near the lake, take the higher path through the meadows.  We took the lower path and had a good day out, but didn’t reach the summit.

It wasn’t until a few months later that I was back out in Tignes and we decided to give the climb another try.  Starting the climb above 2000m meant that with an early start, a sunrise summit and back down again was do able by the afternoon.

Our alarm went off at 4.30am and we had reached the car park by 5.20am.  It was an almost full moon but the cloud cover shut out all the light and it was pitch black.

It’s a steep ascent to the start of the West ridge. Our first hour was in darkness and looking back we could see the dimly lit Tignes villages.  By the time the sun came up we reached the rocky ridge and welcomed the ease of some flattish ground to cover before the scramble leading to the snowy ridge and the final rock ascent.  Being late in the season most of the snow was melted so although we used ice axes we didn’t need our crampons.

We were making good time and had a break around 7am.  I added a few layers and took in the views which were getting more impressive with every meter we climbed.

The final rocky section was trickier than we’d expected, it was icy and quite slippery.  I’d been focusing on my feet and looked up to see the summit was close.  Our route up was still in the shade but as we reached the top at 8.44am the morning sun hit us and the incredible view over the Aosta Valley was breath taking.

In fact, the entire view was breath taking and the moving cloud made it all the more dramatic.  For a few minutes we had glimpses of Mont Blanc but within 20mins the entire summit was in cloud.  We had been so lucky to have arrived before the cloud set in.

It was brutally cold at the top, so after a few photos we soon headed back down.

We were both in very high spirits on the way down.  It was brutal on our knees but it was such a great feeling to have finally reached the top of Sassiere.  We were back at the car before noon and by 1pm were drinking mugs of hot tea and were very happy.

The icing on the cake was when GoPro chose our summit photo to be Photo of the Day on their social media. 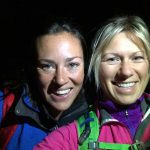 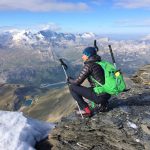 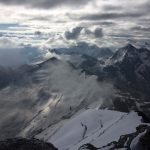 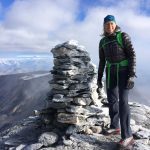 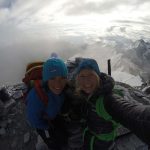