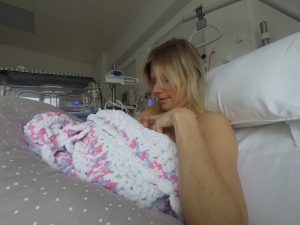 I posted too soon

On the morning of 3rd November, I did a social media post about making another week pregnant.  Soon after a mid-wife came in and was doing the usual check-ups. 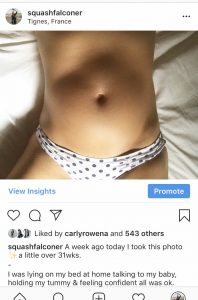 I was hooked up to the monitor in my hospital bed, where I’d been lying still for a week, to see how the baby’s heartrate was doing.  It all sounded fine.  We were listening to the quick, consistent rhythm when suddenly it plummeted.  My eyes met with the mid wives, I was terrified and she looked concerned.  Within a few seconds the heartrate was back up and into it’s familiar rhythm, but I knew all was not well.

The mid wife didn’t give me my daily blood thinning injection.  (Early on in the pregnancy I’d developed a Deep Vein Thrombosis (DVT) and have been injecting daily.  I needed to have the injection out of my system, ideally, for 12hrs before giving birth).  During the week lying in hospital, I was trying to face the reality that she might come any day, but I still believed I could make 35weeks, maybe even 36.

The baby will be coming shortly

The obstetrician was in my room and saying to me, “we’re going to take you downstairs and keep you on the monitor.  The baby is in distress.  I need you to mentally be prepared that we will very likely have to induce you today.  We will aim for a natural birth, but if the baby’s heart can’t cope with the contractions we’ll be doing a C-section”.

They wheeled me down through the hospital and into a large room, I looked around and it dawned on me, we were in the delivery room.  I was still thinking, “ah, they’ll monitor me in here, her heartrate will be fine and I’ll be back on the ward soon”.

It took until the midwife came in with a drip, explaining that this would induce my labour in the next few hours, that actually I realised I would be having the baby, now.

I’d long since let go of my ideal birth plan, to have the baby at home, naturally.  The medication for the DVT plus my cervix issues put me straight into the ‘high risk pregnancy’ category and I knew it’d be a hospital birth.  I had read a hypnobirthing book and was hoping for a natural birth with no pain relief.  In my mind I was visualising breathing our baby out into this world, calmly.

If there’s one thing I’ve got good at lately, it’s acceptance.  I’ve had to accept a lot of things the past few months, my life and life style has changed beyond recognition.  Which, of course, happens to most people who have children, but usually the change happens when the baby is born, not from the beginning of the pregnancy.

I was really scared.  Mentally I had to accept the baby was coming now, I might have her naturally, but it might be a C-section.  The induction might take 30hrs and it might take much less.

By 6pm, just 3 hrs after the infusion the contractions were coming every 2.5 – 3mins and lasting 45seconds.  The pain was building with each one.  Jerry and I were in the delivery room alone.  The midwifes watch monitors from their office and only come in when needed.  We’d found a technique to get me through each contraction and it was working well.  I needed Jerry to be tightly squeezing my left hand and counting the seconds out loud in 5’s for each contraction.  “5, 10,15,20….” I knew if I could make 20seconds I could get through the contraction.  Aware I was getting more vocal and the quiet, calm, breath my baby out plan was heading out of the nearest window.  I was struggling.

Just after 8pm things had ramped up and I was being told I needed to have an intravenous drip of magnesium sulfate to protect the babies brain.  I was told I might experience some side effects and I would have to be attached to a heart monitor, have my reflexes constantly checked and would need another needle in my arm.  Wow, did I get the side effects!  I felt dizzy, sick, hot cold and the contractions were building.

I couldn’t really move, I was lightheaded from the Magnesium.  There were drips in each arm and monitors all over me and a nurse hitting under my knees every few minutes to make sure my reflexes were ok.  I was deep into the pain that only a woman in labour will ever know.

I wanted drugs!  The anaesthetist was called in.  I was told to manoeuvre myself to the edge of the bed, lean forward and stay still.  He was giving me an epidural.  Between contractions, I explained I couldn’t be in this position for long and I thought the baby was coming.  I was in agony, sitting leaning forward was horrendous.  I screamed to lie down and was told “there is a needle in your back, you mustn’t move at all, this won’t take long”.

Three contractions later I could feel the head.  I had been telling them (shouting it very loudly!) but I was met with, “do not move”.  Finally, I heard the words, “it’s done, 10 minutes and the pain will go”.   As I rolled over the mid wife saw the head was indeed coming.  There was no time for the epidural to have any effect.  The baby would be out within the next few pushes.

I have no idea how to describe what it feels like to give birth.  It is the most unbelievably intense, unimaginable, yet beautiful pain, like no other, I have ever felt.  Hearing her first cry and feeling her against me, seeing her eyes look into mine and holding our baby for the first time was the most overwhelming and powerful experience I have ever had.  There is more emotion that I thought possible, a bigger love than I have ever felt and from that moment on my life was changed, forever.

She was whisked away from me.  I delivered the placenta and soon after began to go numb as the epidural took effect.  I couldn’t bloody believe it!  I’d had an epidural that I hadn’t even had the benefit of!

A doctor came to talk to me soon after I was hooked up to the drip to be induced.  She explained that my baby would be premature (8 weeks).  And a brief outline of what I could expect after her birth

I was incredibly lucky that I could hold her for a few precious moments when she was born.  She only needed a ventilator for a few hours but has been able to breath on her own since.  She had to have an IV drip for the first three days and was under UV lights for three days for jaundice.  Now there are only five wires and tubes.  A feeding tube, three wire monitors for her heart & breathing and a wire for an oxygen monitor.

She spends her time in the incubator but I can hold her (and do for about 8-12 hours a day).  She’s starting to figure how out to breast feed and I’ve been told to expect that she will be in NICU for 8 weeks.  I am unbelievably lucky that I can stay with her.  So, I will be here in the hospital until she’s ready to go home.

The staff here are incredible.  Every single doctor and nurse has been so kind to me and amazing to our baby.  I will be forever grateful for what they have done for Kit and I. 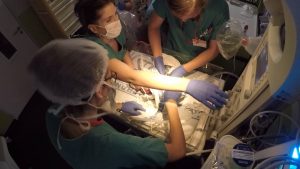 Thank you for all the messages and comments you’ve sent me.  The support has been wonderful and hearing about similar experiences has helped me so much.  This first week has been tough, but I know that she’ll get stronger every day and we’ll get home soon.