This was always going to be a hard blog to write.  For me there’s a fine line with social media about how much I’m happy with sharing and whilst I love sharing the good stuff I’ve never been that comfortable with sharing the not so good stuff.  But I feel like I’m living a bit of a lie online and it doesn’t sit well.  Everything I’m sharing is true, however there’s a bigger picture to this ‘happy family’.

Since late summer I’ve been single.  It’s been a very tough time.

I focused my energy on getting through the pregnancy.  When Kit arrived prematurely her care was the single most important thing.  I will always be grateful to my family, friends and the doctors and nurses in the Neonatal unit for their support and care for me so that I could dedicate everything I have to Kit.

Coming home with her has been amazing.  I can’t begin to describe after 7 weeks in hospital how it felt to come home with my baby girl healthy and well. 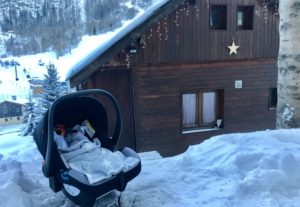 The doctors talked to me in great detail about her care once we left hospital.  Although nearly 6 weeks old, it was not like coming home with a new born let alone a 6 week old baby.  Kit was still a few weeks off her due date and very delicate.  In the UK the doctors said she was due Dec 26th and in France the doctors said Jan 5th!

The biggest concern is her getting Respiratory Syncytial Virus (RSV).  Premature babies lungs are especially vulnerable because they were born before their lungs and respiratory system can fully develop.  It’s really important she is kept away from anyone with a cold or cough.  She can’t have a vaccine but she is having monthly injections of antibodies, called synagies, which will help if she does get the virus.

Unlike last year there hasn’t been mega amounts of snow (so far!) and there’s been lots of sunny days.  It’s been wonderful, physically and mentally, to get outside.  My mum was here for the first week when we came home and she’s just spent the last week with us.  When she’s here, between feeds, I’ve got out on the mountain skiing and done a few short workouts.

On my own it’s hard, but when Kit is asleep I have been able to go just outside the front door, onto the decking and usually I manage 15-30mins of body weight type exercises.  I can see her through the window and between sets, every 1-2mins, I pop my head inside to double check she’s still sleeping.

I was nervous to take Kit out initially but we’ve been getting out more and it’s been great.  I’ve got an Ergobaby Wrap and it’s perfect for wrapping her tightly to me and going out for walks. 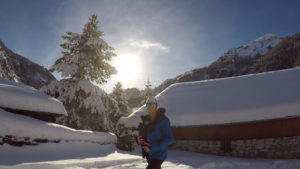 We’ve even managed the bubble lift up to the main part of Tignes.  Not bad being on her first bubble lift at 7 weeks old!

We’ve tested out her Mountain buggy.  It’s got a ski accessory and it’s brilliant on the snow.  When she’s a bit bigger and it’s a bit warmer I can’t wait to go out for runs with her.  Here’s a short video of us testing it!

Seeing friends has been the best therapy and the support I’ve got has meant the world to me.  My sister Jo lives out here too and it’s hard to put into words just how incredible she’s been.  From bringing me all my meals in hospital, to sorting French paperwork for Kit and being the person who says to me, “don’t worry it’s all going to be ok” when I’ve felt like I can’t cope with it all.

A lot of people have a baby and suddenly they lose their ‘freedom’.  It’s a big change.  For me it’s not been like that, bringing Kit home has meant having mine back!  I lost my freedom when I was put on bed rest early on in the pregnancy.  The final week before she was born, after my waters broke I was on total bed rest.  Only allowed up to go to the toilet.  When Kit was born I could move again!  The next 6 weeks  we were in the neonatal unit, some days I would take 15 or 20mins to go outside the hospital, but I just didn’t want to leave her.

So, coming home has meant huge FREEDOM!  Yes, a different kind of freedom to before I had her, but it’s wonderful.

I’m getting good at doing things with one hand, I’m having showers faster than ever before and some days not an awful lot gets done… and that’s ok!  I had so little sleep when we were in the neonatal unit that even waking up several times in the night to feed her I’m getting more sleep than before.

I’ve got talks booked for March when we’re back in the UK.  I love speaking and it’ll be great to get back into it.  Kit will come with me, I’ll feed her before I speak and that should keep her happy while I’m presenting…. Hopefully!

In October I’ll be heading off to Indonesia to lead the MP Adventure Academy.  Check it out and come with me!  It’s an incredible experience.  It’ll mean being away from Kit for 2 weeks, which I’m dreading, but I’m sure she’ll be just fine.  I want her to grow up seeing her mum doing amazing things and know that she can too.

As always I’ve got ongoing work with my partners.  The support I’ve received from Salomon and Suunto has been incredible.  I’m also really excited and happy to be working with new partners too; Kit & Kin, Mountain buggy and Ergobaby.

Last week we had to spend a night back in hospital.  Kit was having her first big check up and her first vaccinations.  She had to be back on the heart and respiratory monitors for 24hrs.  It was awful!  I wasn’t expecting it to be as emotional as it was.  I guess when we in the neonatal unit for so long I was on autopilot, getting through each hour and each day.  Going in again just brought it all back and wow did it make me grateful we can be at home and that she’s ok.

She now weighs 7lbs 3oz, just like a new born, and she’s growing every day.  I love her so much.