DVT – Being diagnosed & what’s next

I was planning the next blog I wrote to be about cycling, not being diagnosed with a DVT!  After a spectacular winter in Tignes, with record snowfall, it was time to get my road bike out.  I had a quick trip to England booked in and then I was excited to be starting some work with Komoot, who specialise in planning and navigation for hikers and bikers.

Then I got a DVT!

DVT (deep vein thrombosis) is a serious condition that occurs when a blood clot forms in a vein located deep inside your body.

“I’m sorry” I continued, “I don’t mean to be rude, but there’s something really wrong and I’m scared”.

The doctor told me whilst his best guess was that I had a DVT, I’d had a scan and they are 99.99% correct.  There was nothing he could do.  He told me to go back in a few hours and see a consultant.

I left.  My leg was swollen, painful, white, cold and I could barely walk.  There’s no way this was cramp – the diagnosis given several times.  Something was wrong, but I’d sat in A&E all night.  I’d just have to go back in 3 hours.  I lay in bed and felt a new pain – in my lungs.

As soon as I mentioned that the next morning I was sent for another scan.  During my first scan, despite insisting the pain was in my calf, I was told that was “nothing to do with it”.  The scan was done from my groin to the top of my knee.  This time, I had a different sonographer.  He repeated the scan, groin to knee and confirmed I did not have a DVT.  Again, I asked why he wasn’t scanning lower.  He said it was ‘hospital guidelines’ to scan groin to knee.  He paused, picked up his scanner and placed it below my knee, “oh, you do have a DVT”.

I had an injection to thin my blood.  I hadn’t realised but without an operation, the treatment for DVT is blood thinners which prevent more clots forming.  The blood flows freely and your body dissolves the clot itself.  In the space of about two hours I was shown how to give myself injections.  I’d be injecting twice a day for a while.  I was told no travel and sport was out of the question.  That the pain would hopefully ease soon, I’d hopefully be walking again soon and the long term consequenses were serious.

It was a lot to take in.

That was just over a week ago and I’m sitting here writing this definitely feeling better.  My leg is doing well.  I’m walking again, the pain is much less and I’ve had a lot of sleep.  Whilst I have certainly got to take it easy for a few weeks the outlook is probably not as bad as I thought.  Since diagnosis the NHS have been fantastic, I’m surrounded by an incredible support network and the people I work with and my sponsors have been both understanding and supportive.

When I told people I haven’t been well I was overwhelmed with lovely messages – every like, comment and message has really meant a lot, so thank you for that. 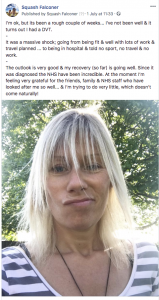 During my talks and presentations I speak about the importance of sometimes not listening to other people.  Whilst it’s good to consider what other people have to say and to listen to advice from multiple sources, sometimes it’s also really important to listen to yourself and make your own decisions.  I knew something was wrong with me, despite being told by several different consultants and doctors that I had cramp.  I was told to take pain killers.  Told to eat more bananas.  I’m so glad that I kept going back and that I didn’t just stay in bed, dosed up on painkillers, eating bananas.  It could have been a very different story if I had.

My symptoms weren’t all in line with a DVT.  Whilst I had a swollen leg and was in pain, instead of being red and hot, my leg was white and cold.  I’m not overweight, unhealthy or inactive so how could I get a DVT?  There is a lot that is still not known about DVT’s.  A DVT in endurance athletes, it turns out, is actually more common than people realise.  A low resting heartrate, doing exercise – which produces a number of prothrombotic cascades and low hydration levels in training – all make it a diagnosis to consider.  It’s good to trust Doctors/Nurses/Consultants but they don’t know everything and don’t always get it right.  Ask questions, listen to your instincts and know that just because you don’t have all the symptoms that doesn’t mean you don’t have a DVT.

There’s nothing quite like being seriously ill, thinking I might die or losing my health to make me appreciate being alive and being healthy.

Despite people, understandably, thinking I might be a dreadful patient, unable to sit still, I’m actually feeling humbled and grateful that the outlook is good.  I’m taking it easy and finding out as much as I can about DVT, aftercare and consequences.  Please share any advice you have!  I’ve put my running kit to one side (for now), have embraced the compression socks and am aiming to walk a little bit further each day. 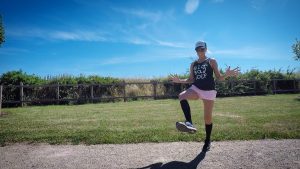 My next ‘wow’ move will likely be less ambitious but it’s all about perspective.  Here’s a blog I wrote last year about finding you ‘WOW’ move.